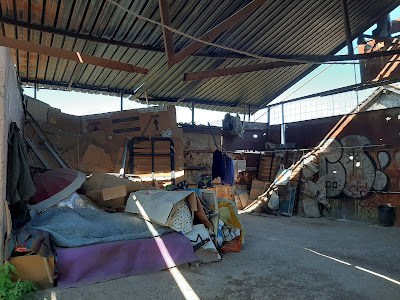 "The place, shocking and fascinating at the same time. COLLAPSED. No place to be and live. One room has remained. A shelter for emergencies. I try to imagine, what it would be like to sleep and dream here at night." Rom, 2021

With a view to the fragile reality of life of homeless people, I approach their temporary camps and the nomadic places in the public space of the city of Rome. Found objects, photographs, stories, encounters and observations form the context for the translation of lived reality into a fictional-magical reality. Trophies of the street, as remnants of our civilization, in combination with painting create poetic stage sets with possibilities for action and thought.

NON PLACE according to Marc Augé defined in such a way as a place of transit, traffic and consumption - no place of communication and no place of social communities and their identity or culture. Our postmodern reality shows itself in social contradictions and social inequalities between outer space tourism and the need for living space as an existential basic neccessity. The city is a stage of the world. A world of transition.

Locations are mobile and changeable in the course of their use and function, in their nature, appearance and attractiveness. "Everything can become a place. / The human being is a symbolic animal and needs the places in which he can form his individual identity in contact and experimentation with others."

Marc Augé: The Future of Earthlings. A Manifesto. 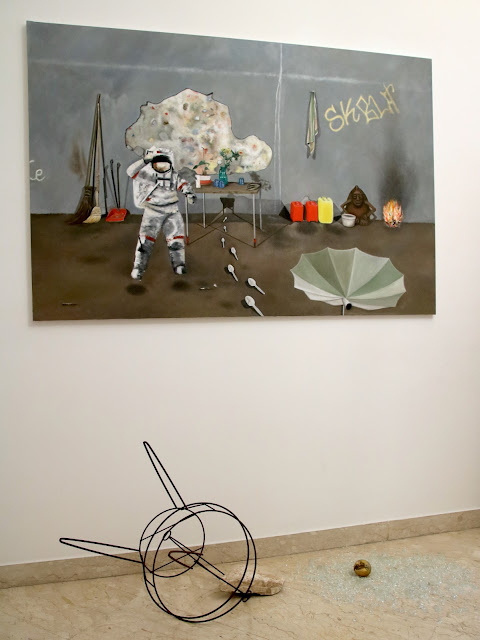 A story because pictures have their own language:

No location is not a place to live, and every space is not suitable for being. Any seat is suitable for staying, and I hardly know any other place where there are more benches in public space than in the italian metropolis Rome. A roof offers protection from rain and snow, walls give stability and define the boundaries of the space.

Under the train tracks, near Stazione Roma-Trastevere, four passages lead through. Two for road traffic and two for passers-by on either side of the traffic. People live there on simple bed frames with blankets and cardboard boxes to protect them from the cold and the glances of passers-by. Everything is arranged in an orderly fashion and furnished as makeshift as possible. Shoes are under the bed, glasses and flowers in the vase on the table. Remnants of a birthday party.

They offer second-hand books for sale and brooms lean against the wall ready to jump. I bought a book about the Guggenheim in Bilbao. A ship with waves. Gehry conquers space and sets rooms in motion. I have not been there. I'm here in the underpass where the train goes over it and the traffic noise doesn't break. It is gloomy in rainy weather and bright when the sun is shining. Then you can also see these murals, which are in the delicate shades.

There was nothing left of it in September. Rubble and ash, sooty walls even in the sunshine. Life is just a mountain of rubbish. Vandalism has done badly to the place and the home. The residents were afraid to go through it while they were still living here. But they will come back, the people without a home, and they will hold on to their existence, like all of us.

LOST PLACE without home NON PLACE only for transit traffic.